What's new in Hyper-V for the Windows 10 Creators Update?


Keep reading for more details.  Also, if you want to try new Hyper-V things as we build them, become a 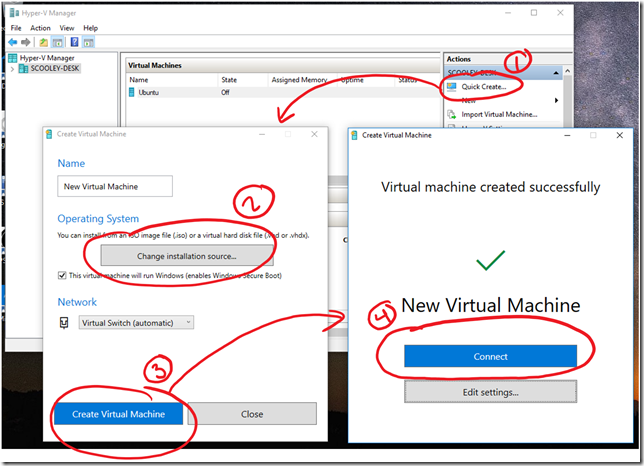 , Quick Create focuses on getting the guest operating system up and running as quickly as possible — including creating and connecting to a virtual switch.


When we first released Quick Create, there were a number of issues mostly centered on our default virtual machine settings (

).  In response to your feedback, we have updated the Quick Create defaults.


Checkpoint and save work on nested Hyper-V host


Last year we added the ability to run Hyper-V inside of Hyper-V (a.k.a. nested virtualization).  This has been a very popular feature, but it initially came with a number of limitations.  We have continued to work on the performance, compatibility and feature integration of nested virtualization.


In the Creator update for Windows 10 you can now take checkpoints and saved states on virtual machines that are acting as nested Hyper-V hosts.


Is your virtual machine impossible to read?  Alternately, do you suffer from scaling issues in legacy applications?

now has the option to adjust 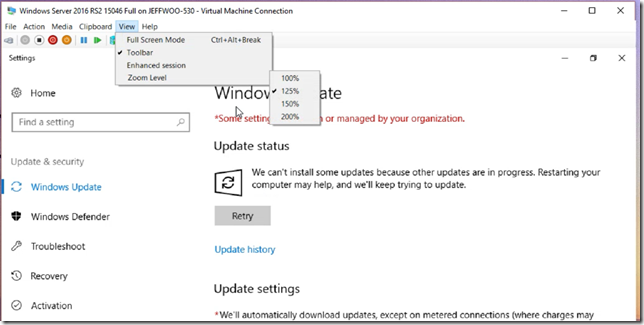 
NAT networking is vital to both Docker and Visual Studio’s UWP device emulators.  When we released Windows Containers, developers discovered number of networking differences between containers on Linux and containers on Windows.  Additionally, introducing another common developer tool that uses NAT networking presented new challenges for our networking stack.


In the Creators Update, there are two significant improvements to NAT:


Until recently, Hyper-V has allocated memory very conservatively.  While that is the right behavior for Windows Server, UWP developers faced out of memory errors starting device emulators from Visual Studio (


In the Creators Update, Hyper-V gives the operating system a chance to trim memory from other applications and uses all available memory.  You may still run out of memory, but now the amount of memory shown in task manager accurately reflects the amount available for starting virtual machines.


As always, please send us feedback!


Once more, because I can’t emphasize this enough,

– almost everything here has benefited from your early feedback.