Download article
by AMARSIGLIA | Nov 1, 2019
First published on MSDN on Apr 29, 2016
It is important to understand that the PowerShell Workflow is a great tool to complete task that require a PowerShell activity but it is limited when performing actions on a bulk amount of objects simultaneously and it lacks the ability for a retry, for example what happens if the PowerShell activity is triggered and the activity fails? if the destination isn’t available? or any other reason why a script might fail what happens? By no means is this post trying to discourage you from using the Workflow activity but rather the opposite, my goal is to encourage you to push the envelope and do great things with FIM / MIM but always consider any possible adverse effects. In fact I often tell my customers I can get FIM / MIM to do just about anything but just because i can doesn’t mean i should. Always use the right tool for the job, “dont use pliers to hammer a nail” With all that in mind lets create some PowerShell Workflows.
The following example is just a simple Get-Date activity which i am using to demo the use of the activity.
Notice that in the script i added a Return which is will be used to pass the results back into the portal to be used later on in additional steps or even just to write a value back to the object initiating the activity. 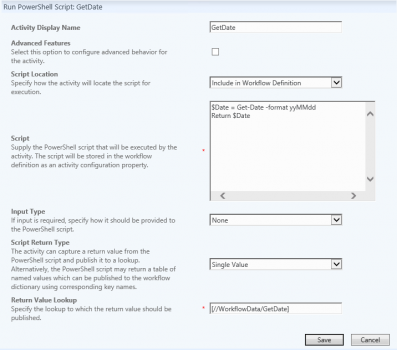