PSScriptAnalyzer version 1.18 was released recently, and ships with powerful new rules that can check PowerShell scripts for incompatibilities with other PowerShell versions and environments.

In this blog post, the first in a series, we’ll see how to use these new rules to check a script for problems running on PowerShell 3, 5.1 and 6.

PSScriptAnalzyer is a module providing static analysis (or linting) and some dynamic analysis (based on the state of your environment) for PowerShell. It’s able to find problems and fix bad habits in PowerShell scripts as you create them, similar to the way the C# compiler will give you warnings and find errors in C# code before it’s executed.

If you use the VSCode PowerShell extension, you might have seen the “green squigglies” and problem reports that PSScriptAnalyzer generates for scripts you author: 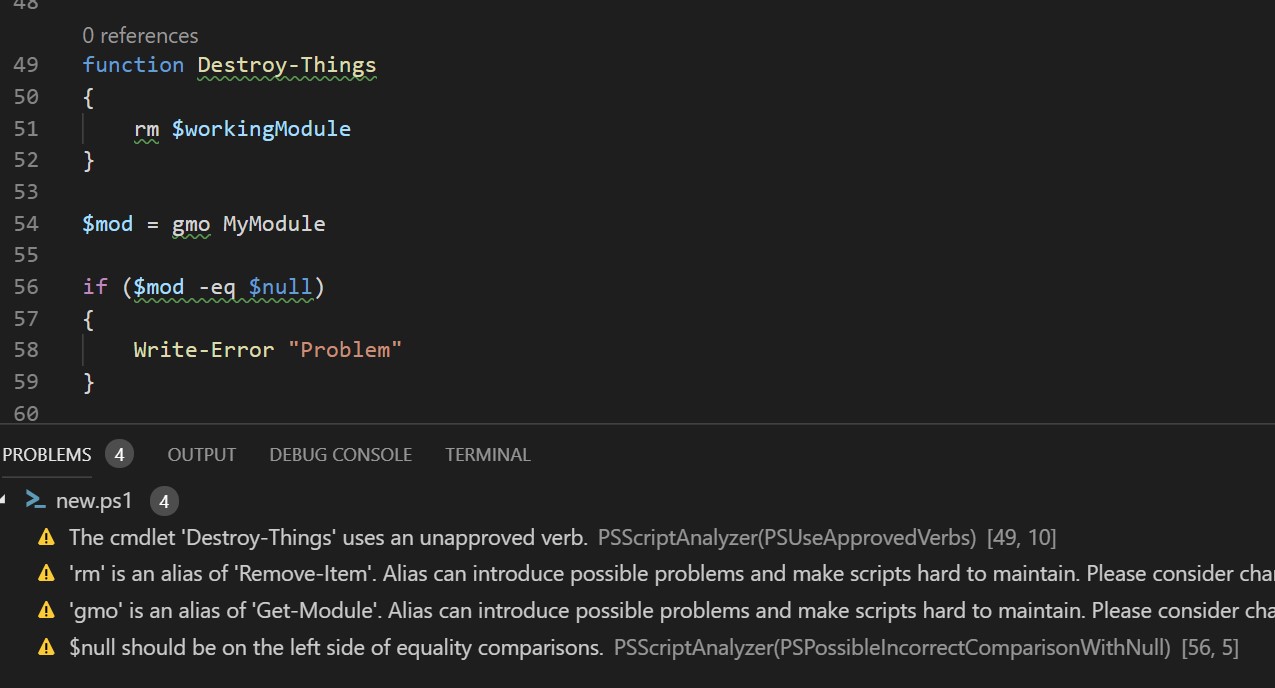 You can install PSScriptAnalyzer to use on your own scripts with:

PSScriptAnalyzer works by running a series of rules on your scripts, each of which independently assesses some issue. For example AvoidUsingCmdletAliases checks that aliases aren’t used in scripts, and MisleadingBackticks checks that backticks at the ends of lines aren’t followed by whitespace.

The syntax check rule simply requires a list of PowerShell versions you want to target, and will tell you if a syntax used in your script won’t work in any of those versions.

The command and type checking rules are more sophisticated and rely on profiles (catalogs of commands and types available) from commonly used PowerShell platforms. They require configuration to use these profiles, which we’ll go over below.

Imagine we have a small (and contrived) archival script saved to .archiveScript.ps1:

Ideally we will test it on those other platforms, but it would be nice if we could try to iron out as many bugs as possible ahead of time.

The first and easiest rule to apply is PSUseCompatibleSyntax. We’re going to create some settings for PSScriptAnalyzer to enable the rule, and then run analysis on our script to get back any diagnostics about compatibility.

Running PSScriptAnalyzer is straightforward. It comes as a PowerShell module, so once it’s installed on your module path you just invoke it on your file with Invoke-ScriptAnalyzer, like this:

A very simple invocation like this one will run PSScriptAnalyzer using its default rules and configurations on the script you point it to.

However, because they require more targeted configuration, the compatibility rules are not enabled by default. Instead, we need to supply some settings to run the syntax check rule. In particular, PSUseCompatibleSyntax requires a list of the PowerShell versions you are targeting with your script.

Running this will present us with the following output:

This is telling us that the [dictionary[string, string]]::new() syntax we used won’t work in PowerShell 3. Better than that, in this case the rule has actually proposed a fix:

The suggested correction is to use New-Object instead. The way this is suggested might seem slightly unhelpful here with all the position information, but we’ll see later why this is useful.

This dictionary example is a bit artificial of course (since a hashtable would come more naturally), but having a spanner thrown into the works in PowerShell 3 or 4 because of a ::new() is not uncommon. The PSUseCompatibleSyntax rule will also warn you about classes, workflows and using statements depending on the versions of PowerShell you’re authoring for.

We’re not going to make the suggested change just yet, since there’s more to show you first.

We now want to check the commands. Because command compatibility is a bit more complicated than syntax (since the availability of commands depends on more than what version of PowerShell is being run), we have to target profiles instead.

Profiles are catalogs of information taken from stock machines running common PowerShell environments. The ones shipped in PSScriptAnalyzer can’t always match your working environment perfectly, but they come pretty close (there’s also a way to generate your own profile, detailed in a later blog post). In our case, we’re trying to target PowerShell 3.0, PowerShell 5.1 and PowerShell 6.2 on Windows. We have the first two profiles, but in the last case we’ll need to target 6.1 instead. These targets are very close, so warnings will still be pertinent to using PowerShell 6.2. Later when a 6.2 profile is made available, we’ll be able to switch over to that.

We need to look under the PSUseCompatibleCommands documentation for a list of profiles available by default. For our desired targets we pick:

The long names on the right are canonical profile identifiers, which we use in the settings:

There might be a delay the first time you execute this because the rules have to load the catalogs into a cache. Each catalog of a PowerShell platform contains details of all the modules and .NET assemblies available to PowerShell on that platform, which can be as many as 1700 commands with 15,000 parameters and 100 assemblies with 10,000 types. But once it’s loaded, further compatibility analysis will be fast. We get output like this:

This is telling us that:

One thing you’ll notice is that the Get-FoldersToArchive function is not being warned about. This is because the compatibility rules are designed to ignore user-provided commands; a command will only be marked as incompatible if it’s present in some profile and not in one of your targets.

Again, we can change the script to fix these warnings, but before we do, I want to show you how to make this a more continuous experience; as you change your script, you want to know if the changes you make break compatibility, and that’s easy to do with the steps below.

The first thing we want is to make the PSScriptAnalyzer invocation more automated and reproducible. A nice step toward this is taking the settings hashtable we made and turning it into a declarative data file, separating out the “what” from the “how”.

Now we can run the PSScriptAnalyzer again on the script using the settings file:

This gives the output:

Now we don’t depend on any variables anymore, and have a separate spefication of the analysis you want. Using this, you could put this into continuous integration environments for example to check that changes in scripts don’t break compatibility.

But what we really want is to know that PowerShell scripts stay compatible as you edit them. That’s what the settings file is building to, and also where it’s easiest to make the changes you need to make your script compatible. For that, we want to integrate with the VSCode PowerShell extension.

We already have our settings file ready to go from the last step, so all we have to do is point the PowerShell extension to the file in the VSCode settings.

You can open the settings with Ctrl+, (use Cmd instead of Ctrl on macOS). In the Settings view, we want PowerShell > Script Analysis: Settings Path. In the settings.json view this is "powershell.scriptAnalysis.settingsPath". Entering a relative path here will find a settings file in our workspace, so we just put ./PSScriptAnalyzerSettings.psd1:

Now, opening the script in VSCode we see “green squigglies” for compatibility warnings: 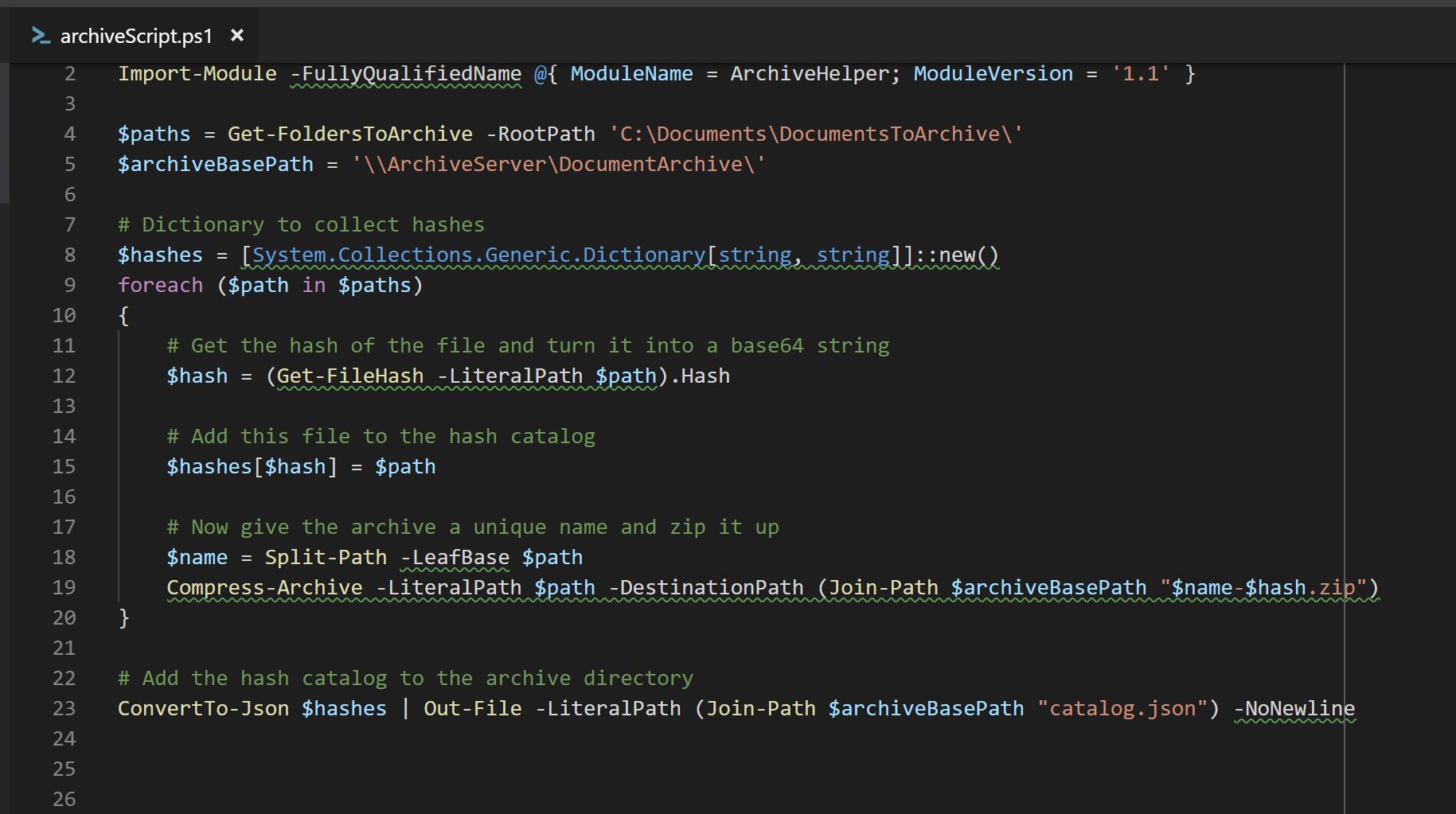 In the problems pane, you’ll get a full desrciption of all the incompatibilities:

Applying this change, the script is now:

The other incompatibilities don’t have corrections; for now PSUseCompatibleCommands knows what commands are available on each platform, but not what to substitute with when a command isn’t available. So we just need to apply some PowerShell knowledge:

We end up with something like this (the specific implementation is unimportant, but we have something that will work in all versions):

You should notice that as you type, VSCode displays new analysis of what you’re writing and the green squigglies drop away. When we’re done we get a clean bill of health for script compatibility: 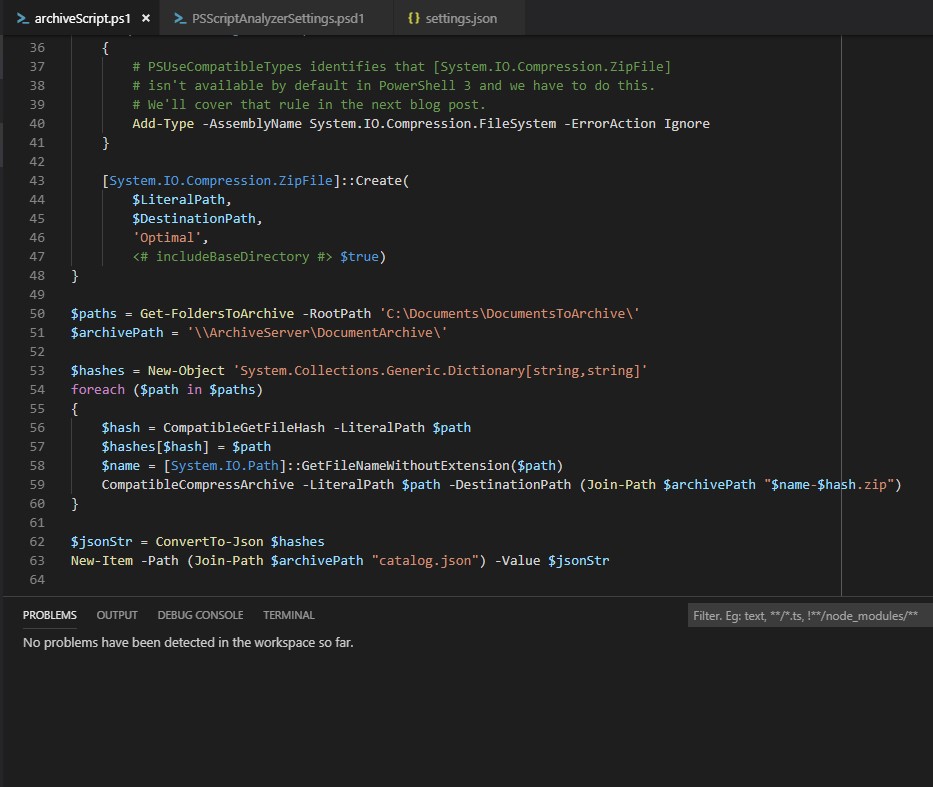 This means you’ll now be able to use this script across all the PowerShell versions you need to target. Better, you now have a configuration in your workspace so as you write more scripts, there is continual checking for compatibility. And if your compatibility targets change, all you need to do is change your configuration file in one place to point to your desired targets, at which point you’ll get analysis for your updated target platforms.

Hopefully in this blog post you got some idea of the new compatibility rules that come with PSScriptAnalyzer 1.18.

We’ve also looked at using the compatibility rules in with the PowerShell extension for VSCode, where they come by default from version 1.12.0.

If you’ve got the latest release of the PowerShell extension for VSCode (1.12.1), you’ll be able to set your configuration file and instantly get compatibility checking.

In the next blog post, we’ll look at how to use these rules and PSUseCompatibleTypes (which checks if .NET types and static methods are available on target platforms) can be used to help you write scripts that work cross platform across Windows and Linux using both Windows PowerShell and PowerShell Core.