Gateways are used in SDN to provide external connectivity to a virtual network. This can be connectivity to an on-premises network or to the physical network in the same datacenter. You can get more information about gateways in the topic 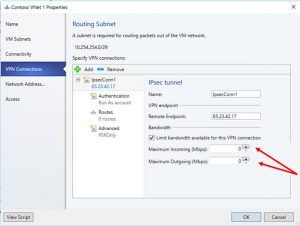 When the customer tried to change these gateway bandwidth settings from the SCVMM UI, he received the error ID 26909,

as depicted in the following screen shot. 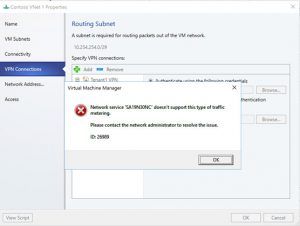 SCVMM currently does not support changing bandwidth settings for a VPN connection. They will start supporting this shortly. By default, the inbound and outbound bandwidth is set as 500 Kbps.

Meanwhile, if you want to change bandwidth settings, you can use the Network Controller Windows PowerShell command

Even after changing the VPN network connection bandwidth settings to 200 Mbps by using Network Controller Windows PowerShell commands, the customer observed a bandwidth cap of about 150 Mbps for the connection.

The customer had set the gateway capacity as 1000 Mbps (this is the default value in the SCVMM UI). The

parameter denotes the normal TCP bandwidth which is expected out of the gateway VM. Customer should fill this accordingly based on his underlying network speed. 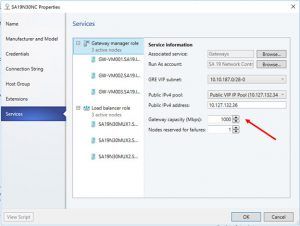 Maximum IPsec tunnel bandwidth is limited to (3/20)* Gateway Capacity on a particular gateway. So, if the gateway capacity is set to 1000 Mbps, the equivalent IPsec tunnel capacity would be 150 Mbps.

The equivalent ratios for GRE and L3 tunnels are 1/5 and 1/2, respectively.

of the resource, the “Status” would have been “Failure” with “DetailedInfo” giving more details about the error.

If you want to setup SDN through SCVMM, see the topic

. Before starting the setup, you can review the SDN planning guidance in the topic