LEDBAT is the background data transfer product built into the Windows networking stack and recommended by the Windows Data Transport team for moving bulk data without interfering with foreground traffic. LEDBAT has a couple of advantages that make it our choice for the Windows networking stack. LEDBAT automatically leverages any unused bandwidth in the network and in the blink of an eye relinquishes the bandwidth to any foreground traffic that is present in the network. Also, LEDBAT is what we call a pluggable congestion controller. That means that it is fully integrated into the Windows networking stack at the TCP layer and gives you all of the goodness of Windows TCP in addition to LEDBAT’s background characteristics. Also, LEDBAT is a mature and well tested product. It is already in production use in many Windows products including Windows Updates, System Center Configuration Manager, Windows Error Reporting and OneDrive. (Please check with the individual product to find if LEDBAT is used in a default on, opt in or any other configuration).

Let’s dive in a little deeper on this. 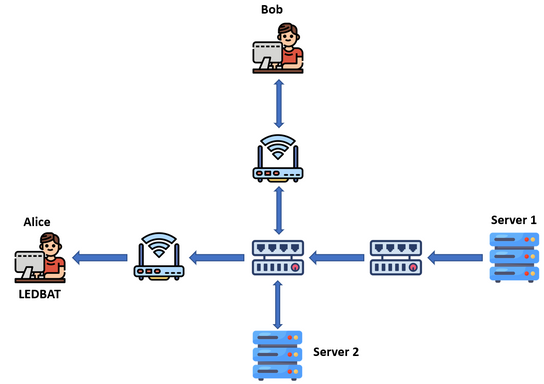 The secret is in LEDBAT’s quick reaction time. When Bob needs the network bandwidth, Alice’s LEDBATed data flow senses this condition in about 60 milliseconds. Before Bob can blink his eye, the bandwidth is available to him. For instance, if Bob is downloading web pages, he will have the full network bandwidth available for him to receive the web pages and while he is reading the web pages (not using the bandwidth) Alice’s background download will continue until Bob needs bandwidth again.

Make sure that you only LEDBAT Background Data

Can I Set Priorities for Data Flows with LEDBAT?

Nope, LEDBAT is not QoS. Connections either use LEDBAT or they don’t. The reason for this is that LEDBAT is an integral part of TCP and the algorithm is carefully balanced. Adding priorities to LEDBAT would require manipulating that balance and add complexity that we don’t want. Also, in order to do priorities right (IMO) in-network participation is required. That means that all the routers and switches in the data path would have to participate. This is a requirement that we don’t want in Windows LEDBAT.

Yes, this is very confusing. To simplify things, we will just call it LEDBAT for Windows or simply LEDBAT. How this plethora of names came about is a longer story. LEDBAT is experimental: RFC 6817: Low Extra Delay Background Transport (LEDBAT) (rfc-editor.org). The original LEDBAT has some issues that prevented us from bringing it to production, so we fixed them. The whole thing with the fixes we called LEDBAT++ (LEDBAT plus our fixes).

However, this makes things complicated for an algorithm like LEDBAT which controls the sending rate in order to yield the network bandwidth. Inside of Windows TCP is a thing called a pluggable Congestion Controller which controls the sending rate. LEDBAT++ is a pluggable Congestion Controller which we . This is well and good for applications like SCCM and Windows Error Reporting which control the sending side of the connection. Just plug in LEDBAT++ and start sending. But, what about client-side apps that download stuff from servers that they don’t control or that are very difficult to change? For these apps we need a “side” LEDBAT.

This is where rLEDBAT comes into play. We built rLEDBAT in the Windows Server 2022 era and added it to the Windows LEDBAT family. So, when we say “Windows LEDBAT” we are saying LEDBAT++ and rLEDBAT together which means that all data flow into and out of the LEDBATed connection will behave with LEDBAT style politeness yielding bandwidth to foreground connections.

So, why didn’t we just make both of them together at the same time and avoid the LEDBAT++/rLEDBAT naming complexity? Well, there were many reasons. is that rLEDBAT is not a Congestion Controller like LEDBAT++ because there is no such thing as a receive side CC. Instead, we had to use the TCP flow control mechanism (receive window) which you can read about in my other blog. Also, the LEDBAT algorithm (which you can read about in RFC 6817) has to know the connection Round Trip Time or RTT which measures how long it takes to send data from the TCP sender to the TCP receiver. RTT is automatically measured by TCP for the sender side, however, there is no such measurement for the receive side. To make rLEDBAT we had to use TCP’s flow control for Congestion Control and use TCP timestamps for RTT measurement. All this added complexity made it take longer to develop rLEDBAT and productize it for a fleet as large as Windows.

How do I configure Windows LEDBAT?

LEDBAT for Windows is configured either with Admin templates or programmatically with a TCP socket option.

This will configure a server to LEDBAT any client that connects to it on port 4445. Unfortunately, TCP templates are not available on Client.

Note that SIO_PRIORITY_HINT must be set before you call accept/connect().