This article will explain and show the use cases for using Nodepools in Kubernetes:

In a Kubernetes cluster, the containers are deployed as pods into VMs called worker nodes.

These nodes are identical as they use the same VM size or SKU.

This was just fine until we realized we might need nodes with different SKU for the following reasons:

These teams realized that logical isolation with namespaces is not enough. These reasons led to the creation of heterogeneous nodes within the cluster. To make it easier to manage these nodes, Kubernetes introduced the Nodepool. The nodepool is a group of nodes that share the same configuration (CPU, Memory, Networking, OS, maximum number of pods, etc.). By default, one single (system) nodepool is created within the cluster. However, we can add nodepools during or after cluster creation. We can also remove these nodepools at any time. There are 2 types of nodepools:

Nodepool might have some ‘small’ different configurations with different cloud providers. This article will focus on Azure Kubernetes Service (AKS). Let’s see a demo on how that works with AKS.

1. Create an AKS cluster with one single system nodepool

This will create a new cluster with one single nodepool called agentpool with 3 nodes.

This node pool is of type System. It doesn’t have any taints. Taints allows a node to ‘accept’ only some pods to be deployed. The only pods that could be deployed are the ones using a specific Toleration. In other words, the node says « I cannot accept any pod except the ones tolerating my taints ». And the pods says « I could be deployed on that node because I have the required toleration ». More details about taints and tolerations here.

But it has some labels for its nodes. Let’s show the labels with the following command: 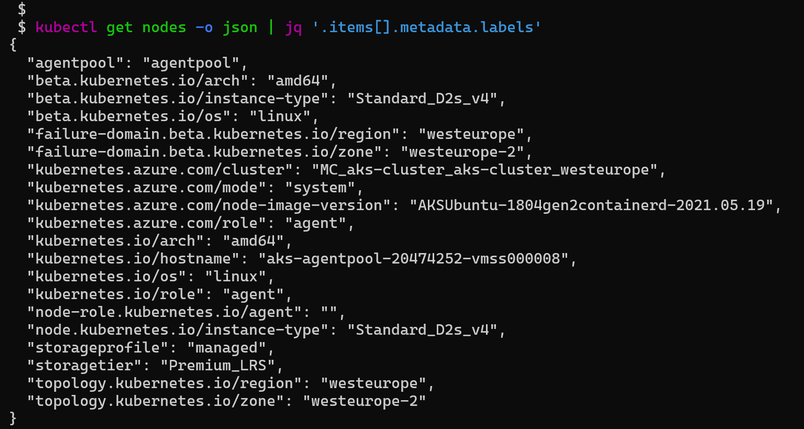 2. Add a new user nodepool for the user applications

We’ll add a new user nodepool. That could be done using the Azure portal. Go to the cluster, search for Nodepools in the left blade, then click ‘add nodepool’. 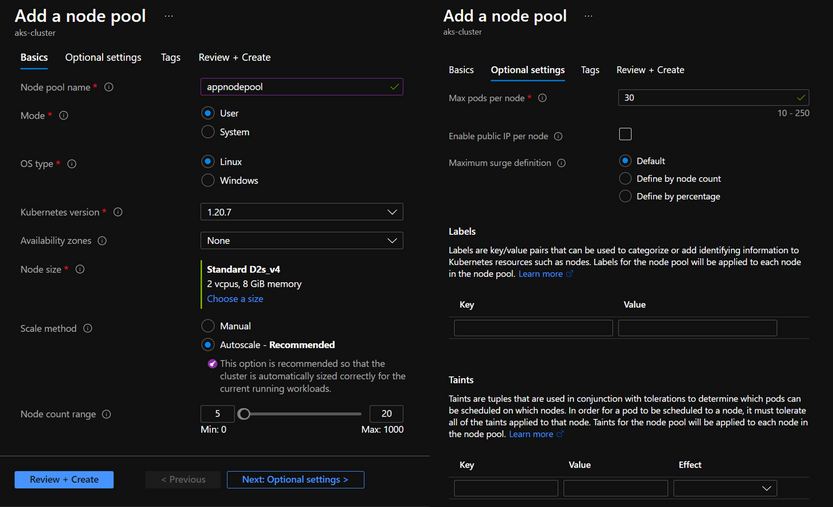 The creation of the nodepool could be done also using the command line which have more options like specifying Spot instances.

Note the –priority parameter that could be used with value “Spot” to create Spot VM instances. Spot instances are used for cost optimization.

We can then view the 2 nodepools from the portal or command line.

The end result of adding a new nodepool should be like the following:

3. Deploy an application into a specific nodepool.

By default, if we deploy a pod into the cluster, it could be deployed into any of the 2 nodepools.

However, we can choose to target a specific nodepool using Labels on nodepools and nodeSelector from deployment/pods.

Each nodepool have its own set of labels like the agent pool name (“agentpool”: “appsnodepool”,). We can use the label to target the nodes by using nodeSelector from the deployment file. More details about Labels and nodeSelector here.

Let’s show the labels of one of one of the users nodepool nodes with the following command. Make sure to replace the node name.

Note how all the 100 pods are all deployed to the same user nodepool. 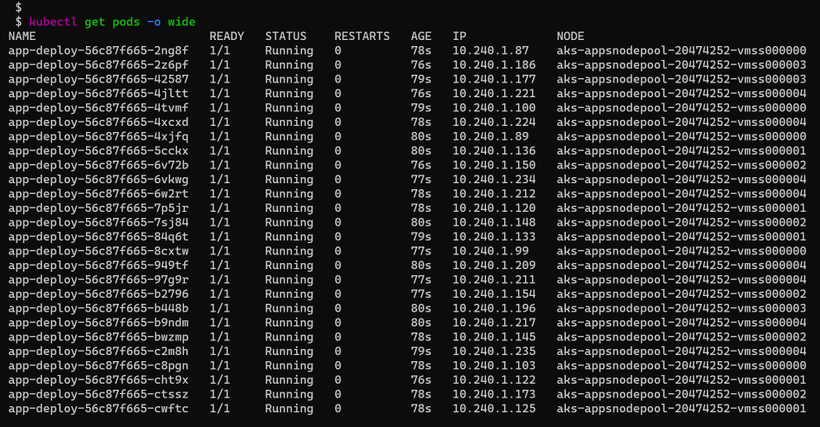 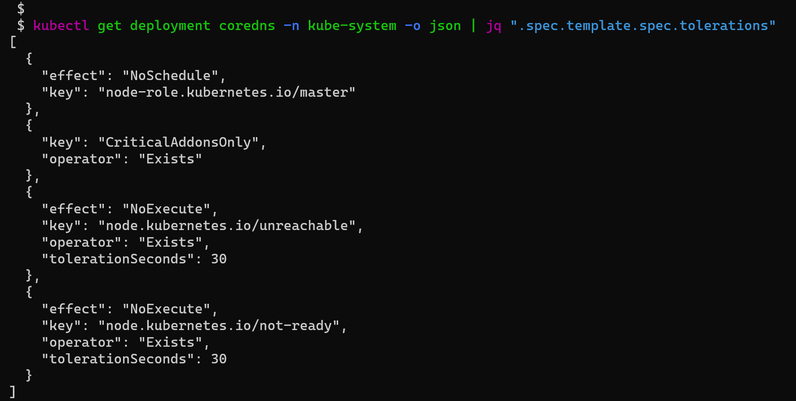 The same thing could be achieved using the Azure portal : 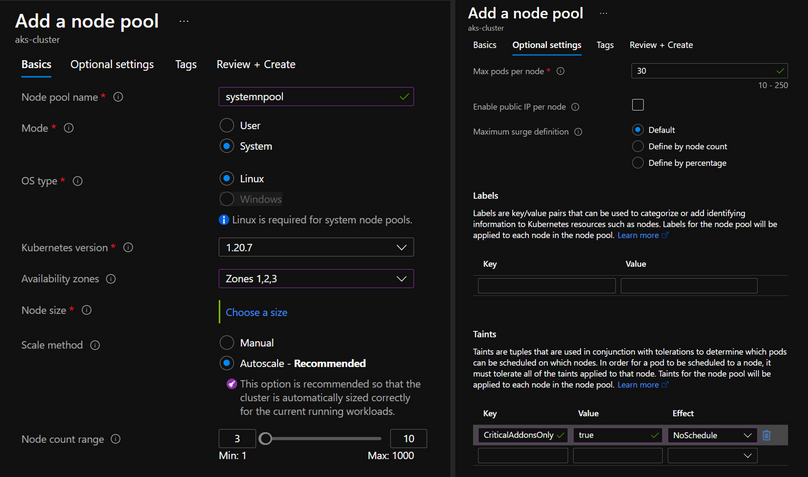 System pods will still run on old system nodepool until we drain that nodepool or delete it.

Let’s go to delete it from the portal or the following command.

Let’s now verify that system pods (except the DaemonSets) are deployed only into the new system nodepool nodes : 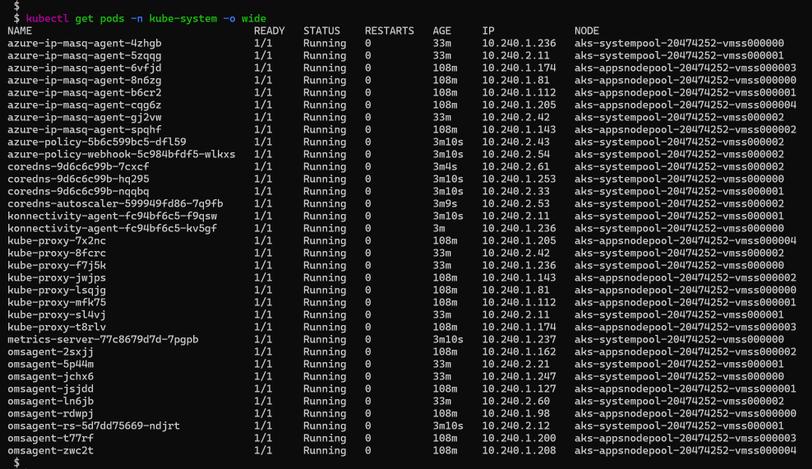 Note that it is possible to force pods to be scheduled into the system nodepool by adding the following toleration to the pod or the deployment. This should be done to the components like Calico, Prometheus, Elasticsearch…


5. Using Nodepools to upgrade the cluster with less risk.

Upgrading the entire cluster (control plane and all nodepools) might be a risky operation. Nodepools could be leveraged to reduce this risk. Instead of upgrading the nodepool, we proceed with blue/green upgrade:

It could be also used to isolate different applications, teams, or environments.

It helps also to upgrade the cluster with less risk.

In addition to that it helps to use a new Subnet with different IP range if needed.

And it helps to reset the max pods per node which might be forgotten during cluster creation.