I was tinkering around with my lab setup which consists of a domain, proxy server, primary and replica servers. There are some gotchas when it comes to Hyper-V Replica and proxy servers and I realized that we did not have any posts around this. So here goes.

If the primary server is behind a proxy server (forward proxy) and if Kerberos based authentication is used to establish a connection between the primary and replica server, you might encounter an error:

Hyper-V cannot connect to the specified Replica server <servername> due to connection timed out. Verify if a network connection exists to the Replica server or if the proxy settings have been configured appropriately to allow replication traffic. 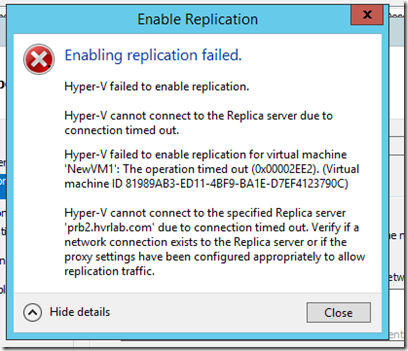 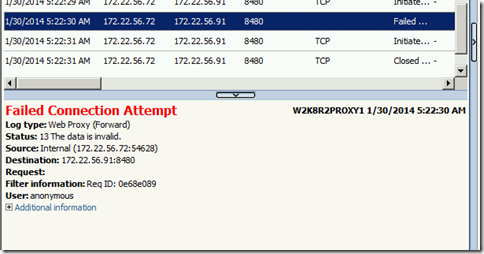 If a successful connection goes through, you will see a spew of messages on netmon

When I had observed the issue the first time when building the product, I had reached out to the Forefront folks @ Microsoft to understand this behavior. I came to understand that the Forefront TMG proxy server terminates any outbound (or upload) connections whose content length (request header) is > 4GB.

The proxy server returns a

response in the form of a bad-request

That isn’t superhelpful by any means and the error message unfortunately isn’t too specific either. But now you know the reason for the failure – the proxy server terminates the connection the connection request and it never reaches the replica server.

So how do we work around it – there are two ways (1) Bypass the proxy server (2) Use cert based authentication (another blog for some other day).

. When the flag is enabled, the request (for lack of better word) bypasses the proxy server. Eg:

This is not available in the Hyper-V Manager or Failover Cluster Manager UI. It’s supported only in PowerShell (and WMI). Running the above cmdlets will create the replication request and start the initial replication.