During the daily challenges at Customer Environments one thing was coming to my mind on every Engagement. No one trusts the monitoring status of their Console. 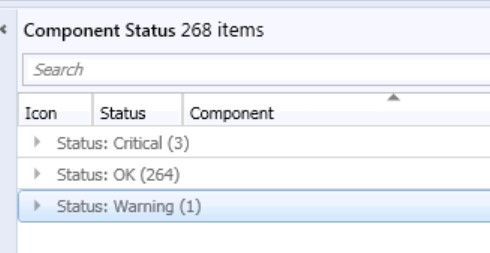 This is a familiar look in the morning at every Infrastructure I have seen during the past years. During the day, the counts are shifting a little bit but at midnight during the Status Summarizer Reset everything will go back to green and on the next day everything repeats. The most Customers are monitoring the Systems and will be notified if there is a bigger Issue with one of the Servers. But that’s an reactive Solution.

If you ask anyone about the status, the answers are always the same:

But if you want to get from the reactive to the proactive side it’s necessary to edit the Thresholds of the Stats in your Environment and to change the handling of the Supporters to a new level.

In this Blog I want to show you the journey we have taken to get to this point.

After the decision to change the whole process the biggest and most annoying part of the project starts, the Preparation Phase. During this phase you must start to collect all the relevant data for your own infrastructure. This includes:

First, it is important to understand how the Threshold Topic works. You got all the Components at your Infrastructure and defined Thresholds like this:

This means that the Component SMS_AD_SECURITY_GROUP_DISCOVERY needs 2,000 Messages of the Type Information to get to the Status Warning and 5,000 to get at the Critical state.

In Addition, it needs 1 Error Message to Change at the Warning State and 5 Error Messages to change to the Critical state.

This Defaults will make sense for some Components, but every Environment is different and needs separate Thresholds. Even at a Hierarchy you can’t compare Site A to Site B if there is a different count on Clients and Distribution Points.

One thing should also be clear – there is an separate Component named SMS_COMPONENT_STATUS_SUMMARIZER which detects if the Threshold of one Component is reached and switch it to the defined Status.

Listing Classification of your Components

After that you should also add the Systems where every of these Components is installed. When finally all Components are listed and linked to the Site Systems, you should start to tag the components with different Categories like this:

Thresholds during the past two weeks

As mentioned before the Count of Messages is relevant. So, you should start studying the Counts of Information, Warning and Error Messages for each Component during at least the past two weeks and wrote them down.

Some other Environment Issues like ‘Managements Points with a lower workload’ or ‘Distribution Points where the Site Server was unable to read the Registry’ got lighted out. This could be addressed during the Preparation Phase and were shown as good Quick Wins.

After you listed all the Message Counts you will be able to get an view all over the Weeks and to define how much Errors on some Components are ‘Normal’ and where too many Information Messages may can be Critical for the Environment.

Status Messages which can be ignored

On my Investigation, I found some Messages without any Sense for this Environment and Excluded them to minimize the Messages. For Example:

Message ID 9520 on SMS_DISTRIBUTION_MANAGER informs you that a Distribution will not take place because the Distribution Point is set on Maintenance Mode.

There are more Messages that could be not relevant for your own Environment, but you must detect and decide it by yourself.

After collecting all this Data it’s time to define new Thresholds for each Component on each Site. As first Key Factor you should choose the defined Category:

(Note: The Information that the Component has been switched will also add one Message to your count.)

This Component on the CAS is writing 11 Information Messages per Day the whole Time I was spectating. If it’s writing more than 11 Messages, it’s important for me to see what’s different and if there is something we need to Investigate.

Discuss this step with all Units which are involved at your daily Business. They can show you some aspects you may not notice.

After the Definition, the technically Part comes up. As mentioned before the Thresholds are defined at the GUI: 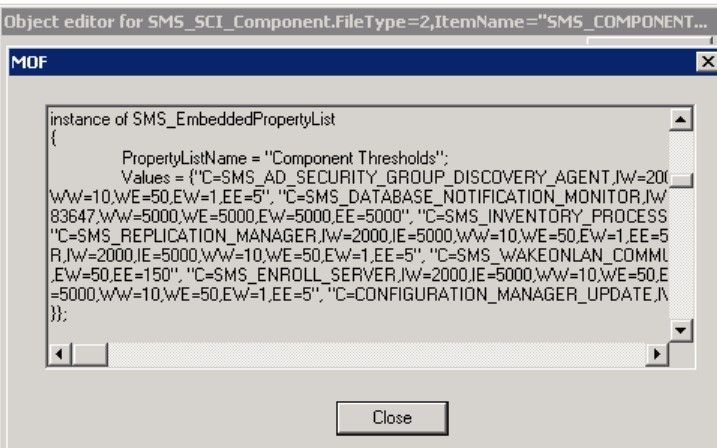 And also by using SQL:

The most uncomplicated (but also the longest way) to update the Thresholds is using the Console but it’s a pity to update all Files using the GUI:

The smartest way is using SQL. But be careful – The command must be exactly been executed. If you forget to define the Name your Environment will be crashed. So please perform a Backup before you try to edit the Thresholds and use the whole Command. I copied the Values of the .xml File at the SQL query and edited the defined thresholds.

!YOU WILL HAVE TO UPDATE THE WHOLE XML FILE, NOT JUST THE ENTRIES YOU WANT TO EDIT!

If you choose this way you can use the following Query:

It is possible that the defined Thresholds will be overwritten with the Default during an SCCM CB Update. So please check the Settings after every Update. You should also be aware of new Components releases with any Version.

This Adjustment is not the End of the Process – it’s the Start. After you have done the first part you can choose the possibilities and develop it to a new level. Some Thresholds will have to be edited later. You should implement a Documentation to get rid of recurrently appearing Issues and you can define Rules, E-Mail Messages or Actions that should be performed after special Events appear. It’s just the first step out of the reactive Support moving to a Proactive Service and an Improvement of your Service Quality.