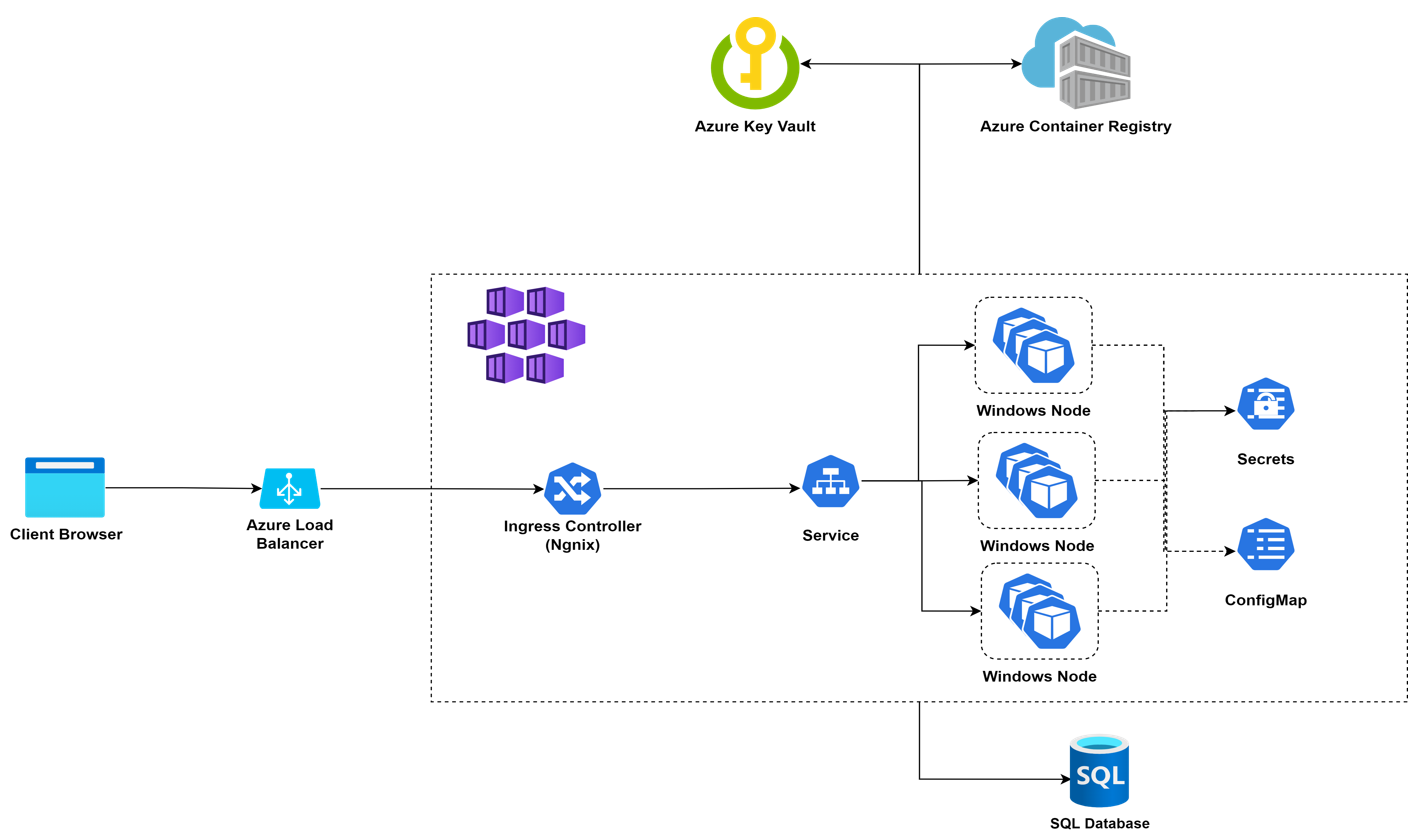 We’re getting into the third topic of our blog post series about IIS on Windows containers. In case you missed, check out the blog on SSL certificate lifecycle management and IIS app pools and websites.

Today, we’re covering hardcoded configurations on IIS. This blog post covers the concept on IIS, but the idea is that any type of workload going into a container and running at scale on a Kubernetes environment should follow these best practices.

Thinking of workload vs. instances

When dealing with VMs, it’s common to think about the virtualized hardware and storage that goes into that VM. Since a VM is an entire OS, and we treat them as regular servers, whenever an application needs to persist state and data, we simply attach a virtual disk to that VM and call it a day. The idea with containers is a bit different. With containers, you should change the mindset to never rely on a specific instance of container. If one container goes down, another container should be able to be brought up and pick up where the previous one left off. For that to work, any state or data should be stored outside of the container and presented to any/all container instances running that workload. In the containers and Kubernetes world, this is called persistent storage. It helps in not depending on specific instances of containers and it also helps on scale-up or down scenarios.

That idea of workload mindset vs. instance also brings in another aspect: Not only should the state and data not be inside the containers, but also there should be no hardcoded configuration that restricts the container from running on a specific environment. For example, let’s say you have a dev/test database for your application, and another database for production. This is common as you don’t want to mess up your production data while testing your application. However, changing this configuration could be something simple or more complex depending on how your app (and framework) works. For IIS, web applications using ASP.Net use a config file called web.config. Because all configuration (such as database connection string) lives in the file, the setting is pretty much hardcoded into the instance. That means: If you want to change the database connection string for an ASP.Net web application on IIS, you have to manually change the file.

However, modifying the content of web.config has its own challenges. Newer versions of .Net have native mechanisms to modify the file based on the environment variables that are present in the system, but older versions of .Net Framework don’t. For that reason, a common way to do this, is to use a script that reads environment variables and replaces the values on the web.config file using the native Microsoft XML Document Transformation tool.

The command above should come after the instructions to deploy your ASP.Net web application, usually as the last on your docker file. Next, we need to populate the Startup.ps1 script:

The above does three things: First, it calls another script on which its sole purpose is to create another file, alongside the web.config one, with the environment variables to be used. That’s the Set-WebConfigSettings.ps1 script. The second, is that AFTER the previous script ran, it will call the WebConfigTransformRunner tool (a Nuget package that needs to be restored as part of building your image) to modify the web.config file based on the content of the XML file from the previous step. The third thing it does is to stay on a permanent loop. The reason we do this is because containers need a durable entry point on the docker file we created before. If the program called on the docker file ends (such as our script that just finished) Docker (or the container runtime) will terminate the container as it understands there’s nothing else to do. By keeping this script in a constant loop, we avoid that.

Now, all we need is the content of the Set-WebConfigSettings.ps1:

To summarize what all of the above does:

Passing on environment variables to Windows containers on AKS

When you deploy a container, one of the options you have is to pass on environment variables to it. On Docker, you can pass on those variables when you launch the container by using:

On Kubernetes, the environment variables should be listed on your YAML file as part of the deployment:

The example above shows the YAML file to deploy an application and passes on the environment variable with the right prefix so the container will catch it at deployment time. However, rather than providing the value for that environment variable right away, we stored it on Azure Key Vault, which is being used as a Kubernetes secret. Kubernetes secrets are used to store sensitive application configurations, such as usernames and passwords. Since the connection string for a database requires that, we used this option instead. This option requires that you also pass on a secret YAML with the description of the secret to be used:

On Azure Key Vault, you should specify these variables as secrets that can be retrieved by the AKS nodes, so the application can be properly deployed.

While the process above may sound a bit complex, it’s actually very straightforward: We’re using environment variables with the configuration we want to change for the application depending on the environment we’re deploying to. That means not hardcoded configuration is in the container image, so we have more flexibility to work with the container. This concept should be true for any type of applications, but here we showed how to apply this for ASP.Net applications running on Windows containers on AKS.

If you need a complete, end-to-end example of this running on a more concrete sample application, check out the Windows Containers Demo repo on GitHub. The Ticket Desk and eShop app use this very concept to containerize existing web applications on IIS with Windows containers.

I hope this series is useful to you! Let us know in the comments below.